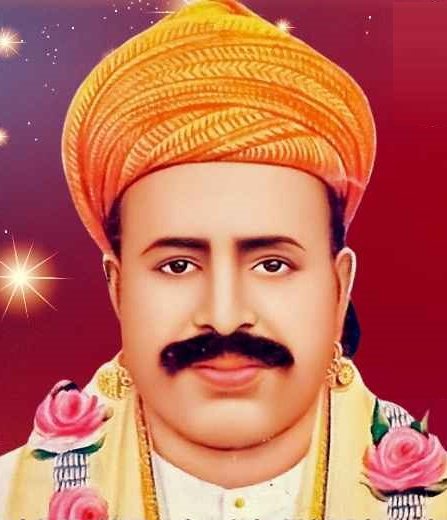 Bhagat Kanwar Ram was born on April 13, 1885 at village Jarwar of district Sukker, Sindh but now part of Ghotki district in Pakistan, in the family of Tarachand, a humble shopkeeper.

Bhagat Kanwar Ram was a disciple of Saint Satram Das of Rahrki Tehsil from childhood and a true Saint in every sense. Impressed with his melodious singing, his Guru Saint Satram Das blessed him that So long he did not keep one single penny from public’s money, his name would shine forever like Moon and Stars.

With his sweet, melodious and sonorous voice, he sang Bhajans and danced in the praise of the Creator. His performances during his Bhagats – the sessions of songs and dance – were so mesmerising that the audience would forget worldly things and be absorbed in his renditions.

Despite being blessed with charismatic voice that moved and mellowed hears, he remained very humble, generous and compassionate throughout his lifetime. Wearing long Kurta and Red turban, he sang bhajans of famous poets and saints like Mira bai, Saint Kabir, Sachal Sarmast, Sami, Shah Abdul Latif Bhittai and others.

Such was the profound effect of his mystical voice that audience would shower the arena with offerings like money, gold and jewellery. However, being a true saint, he did what his Guru wanted him to do and always distributed entire collection among the poor and needy then and there.

His connection with the Creator was so strong that he rendered devotional songs from the inner core of his divinely intoxicated heart. Once while he was rendering a bhajan based on Raga Sarang (the Raga of Rain, as per Indian Classical Music), suddenly the rain clouds started filling the clear sky and rain followed. It’s said that it rained whenever he sang Bhajans based on the Raga Sarang.

This is precisely why Bhagat Kanwar Ram respected and revered by Sindhis, Muslims and Hindus alike, on earth. Every Sindhi in any corner of the world is still awed the proud feeling of being associated with Bhagat Kanwar Ram.

On the fateful day of November 1, 1939, some religious extremists at Ruk Railway Station touched Bhagat’s feet and sought blessings to complete the task they had come for. Bhagat Kanwar Ram blessed them with words “May you achieve your goal” and soon after was shot by them sinking entre Sindhi in shock, anguish and grief.

Apart from a statue placed at Baba Sri Chand Temple at Faqir village in Thatta district and elsewhere in the world, many trusts and organizations have been built by Sindhis in and out of India. Every year, many of Bhagat’s devotees from nearby as well as far-flung areas come to the designated places to sing and listen to his compositions to observe his anniversary.

Out of his 20 extant compositions, recorded and released by HMV Music, these bhajans are publicly available of which the most popular is Naale Alakh Je Bedo Taar Muhinjo (نالي الک جي ٻيڙو پار مهنجو).