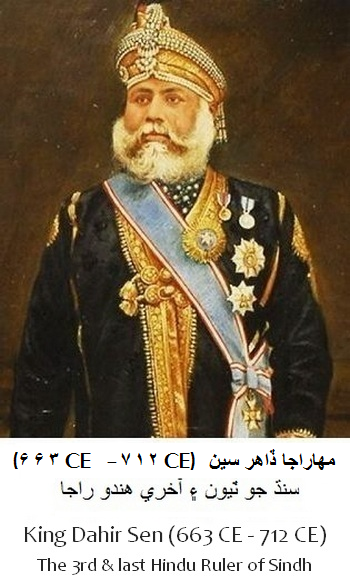 Maharaja Dahir Sen (مهاراجا ڏاهر سين), the 3rd and last Hindu Pushkarna Brahmin ruler of Sindh. He took over the reign from King Chandar in 695 AD and ruled Sindh till his death in 712 AD.

Maharaja Dahir Sen was born in 663 AD at Alor (present-day Rohiri), Sindh to King Chach and Rani Suhanadi and was killed at the age of 49 in the Battle with invading Arabs, led by Muhammad bin Qasim, at Aror (present day Nawabshah), the banks of Indus River, Sindh.

During Maharaja Dahir Sen’s rule, Ummayad Caliphate, that was becoming very powerful, invaded Sindh few times. Under Jaisiah, Maharaja Dahir Sen’s son and commander of Sindh, the Arabs were defeated twice at Debal. After killing of two Arab commanders, Ubaidullah and Budail (or Bazil) killed in the battles, Al Hajjaj bin Yusuf, a notorious pervert and tyrant turned governor of Basra (Iraq), was raged with revenge. Hajjaj now threatened  “Do not to leave a single kafir alive up to the frontiers of China” and appointed Mohammed Bin Qasim, his nephew and son-in-law, as the new invader of Sindh.

Muhammed Bin Qasim started gathering support from local tribes and the rulers of Nerun, Bajhra, Kaka Kolak and Siwistan to strengthen his army. Upon hearing this, Maharaja Dahir’s Vazir advised him to take refuge at one of the friendly kings in India or at least send his family away to a safe place in India. Maharaja Dahir Sen rejected both options and chose to fight irrespective of the consequences.

Before the final Battle at Aror, Maharaja Dahir Sen is reported to have said, “I am going to meet the Arabs in open battle, and fight them as best as I can. If I crush them, my kingdom will then be put on a firm footing. But if I am killed honourably, the event will be recorded in the books of Arabia and India and will be talked about by great men. It will be heard by other kings in the world, and it will be said that Raja Dahir of Sindh sacrificed his precious life for the sake of his country, in fighting with the enemy.“

The Sindhi army, led by Jaisiah, moved to eastern banks of Indus river to prevent Qasim from crossing the Indus River but failed and were defeated at Jitor. In another battle at Aror, Maharaja Dahir was deafeated, leading to his brutal killing.

That evening of June 16, 712 AD, was one of the saddest moments in India’s history as the Arabs had finally conquered Sindh after fifteen attempts by nine Khalifas over a period of seventy-four years (638-712 AD).

Maharaja Dahir Sen was beheaded and his head was sent to Al Hajjaj bin Yusuf while his body was cremated by his followers. His wife Ladi, who was captured, committed Suttee to escape the Arabs.

Ironically, Maharaja Dahir Sen had offered asylum to Imam Hussain, the grandson of Prophet Mohammed, as he was being persecuted at home. While on the way to Sindh, he was intercepted at Karbala in Iraq and killed in the most brutal manner. Eventually, Maharaja Dahir was cruelly killed by the followers of the same tribe.