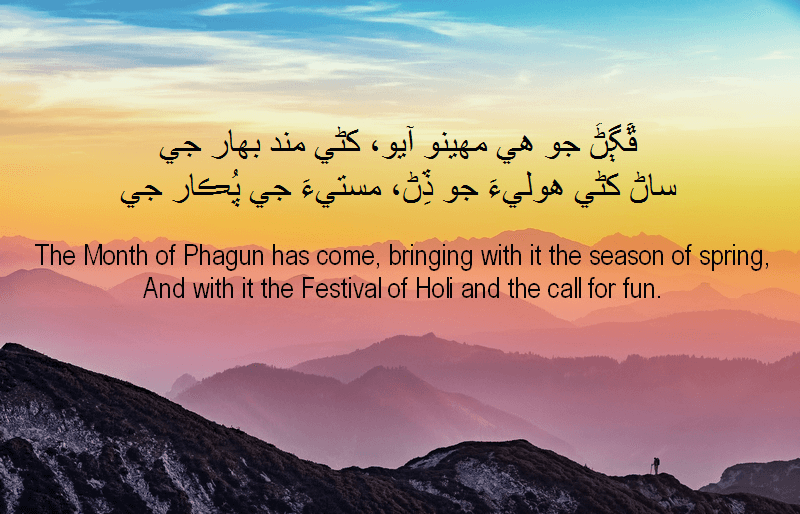 Holi, the Festival of Colours celebrated the world over, marks end of Sindhi month of Phagun that falls between the months of February and March.

The festival of Holi has its roots in India and is celebrated for two days. On the first day, called Holi (هولي), people have great fun during the day time by sprinkling coloured water on one another and at the night, they lit bonfire. They circumference around the holy Holi Fire and pray that it destroys the evils within and outside of them.

On the second day, known as Dhuriyo (ڌوڙيو), adults get together with family and friends and play by smearing one another with coloured powder on and around faces while children play with Squirt (پچڪاري) and Water Balloons (ڦوڪڻا).

It is believed that Lord Shri Krishna (ڀڳوان شري ڪرشڻ) used to play Raas Leela (راس ليلا) with his female friends, known as Gopikas (گوپيون), by sprinkling colour powder (گلال). Thus, Holi is also known as the Festival of Love so many people play with flower petals, instead of colour powder, as gesture of love and respect.

The origin of Holi festival roots to the story Prahlad (پرهلاد). There existed a demon King named Hiranyakash (هرنياڪش) who wanted to rule the Universe. With growing lust for power, he grew violent and caused massive destruction. Hence, Lord Vishnu appeared as Varaha and eliminated him.

Thus ascended to throne his brother Hiranyakashipu, who was determined to avenge Lord Vishnu. He performed intense penance to seek Lord Brahma’s blessings and was blessed with a unique boon that protected him against death under the following circumstances:

This boon made Hiranyakashipu complacent into believing that he was immortal and his lust for power and madness grew manifold without any limits. Since his son Prahlad was a devotee of Lord Vishnu, Hiranyakashipu decided to kill him. Hence, he sought help of sister Holika (also known as Simhika) to eliminate Prahlad on the pretext of taking the blessings of the Fire God.

Holika, who was endowed with a boon to guard her against heat/fire, set herself on fire with Prahlad on her lap. However, Prahlad remained unscathed while Holika was burnt to death. This signifies the triumph of Prahlad, the good, over Holika, the evil and the testament to the power of Bhakti (devotion).

Eventually, Lord Vishnu appeared as Narasimha (half-man-half-lion) to slay Hiranyakashipu in his lap (neither in air nor on ground) with his claws (not caused by weapons/poison/illness) on the threshold of the demon’s palace (neither inside nor outside) at dusk (neither during the day nor at night).

Since this year’s Holi falls on March 17 and 18, SindhiToday.com wishes you and your loved ones a Colourful and Loveful Holi. 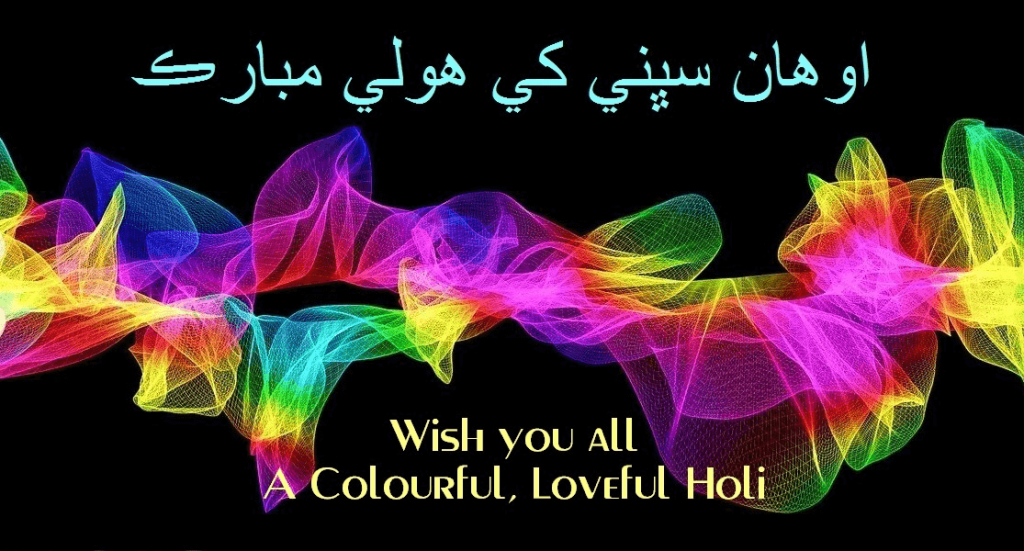