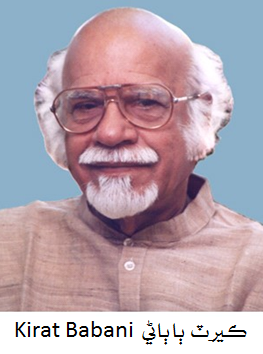 Kirat Choithram Babani (ڪيرٽ چوئٿرام باباڻي), was born on January 3, 1922 at Moro Lakho, District Nawabshah in Sind (now in Pakistan). After partition, his family moved to Mumbai and settled in Prabhadevi area.

A double graduate with Bachelor’s Degree in each Arts and Law, Kirat Babani was a multi-faced personality combining a writer, an excellent orator and someone who would never hesitate to work relentlessly for a cause.

Kirat Babani was well renowned for his immense contribution to Sindhism. Be it education, journalism or even literature, he always remained committed to use his pen with sole purpose of presenting different aspects of life as honestly as possible.

A freedom fighter, jailed for nearly a year in 1942, Kirat Babani led from front the long crusade of over 15 years to have Sindhi language recognized and included in the Constitution of India.

He was firmly against adaption of Devnagiri as the script for Sindhi language and did not mince words to speak his heart out no matter who was opposing his views on this issue.

In addition to leading the Akhil Bharat Sindhi Boli Ain Sahit Sabha for 18 log years, Dada Kirat Babani was a member of the Advisory Board of Sindhi language Sahitya Akademy, Ministry of HRD, Govt. of India and also remained closely associated with various literally and social organization.

Apart from as Editor of Sindh Rises in English and Sind Sujag (سنڌي سجاڳ) in Sindhi magazines since 1991, his contribution to Sindhi literature consists of over 15 books and 3 translations including, strangely, the history of Marathi literature.