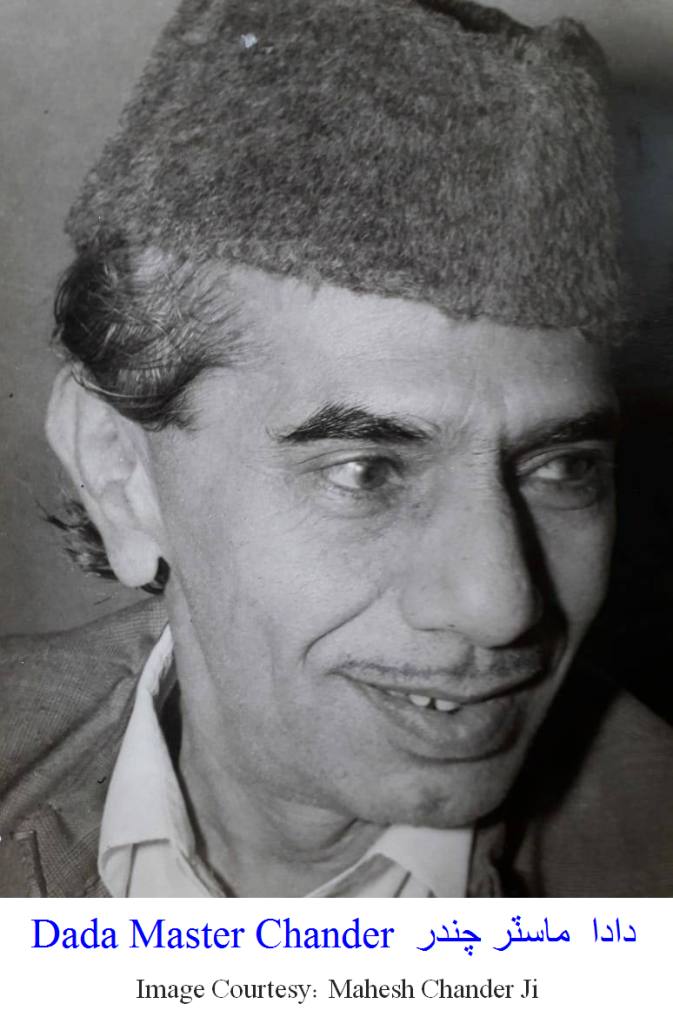 He was passionate about Music from early age though Music was considered as Taboo in those days. Thus, being the only child of a rich family of Landlords (زميندار), he faced resistance from his parents, Assandas (آسنداس دمواڻي) and Rami Bai Damwani (رمي ٻائي دمواڻي) while pursuing Music. However, he kept learning Classical Music secretly and his persistence got the much desired support from his Uncle who even bought a Harmonium for him from Calcutta. This proved to be the beginning of the great Master Chander, whose skills then were polished by Jeevat Ram Mitai, Bade Ghulam Ali Khan, Ashiq Khan Sahab and others.

Thus, after overcoming all odds, Master Chander established himself not only as a Sindhi Folk Singer but also a great Writer and Music Composer. Such was his talent that he could write, compose and sing a song on any situation within no time. During his lifetime, Master Chander is reported to have sung thousands of songs but information is available only about 400 songs in public domain. This was mainly because he performed the songs in public and recording was not common in those days.

After working in the Public Works Department at Nawab Shah, he moved to work in Karachi (ڪراچي). This is when he started many public schools of Music earning him the title of Master. Master Chander set new trends not only in writing soulful lyrics, making simple but enchanting compositions but in singing style, specially, romantic songs. His melody touched the very pulse of love-torn, distressed and disappointed common man and his renderings kept the audience spellbound for hours. It’s said that when Master Chander performed, mesmerized audience threw money, gold and other valuables on stage as he sang.

His first song Suhina Arz Aahe (سهڻا عرز آهي) in 1932 became a phenomenon on the radio like never before in the history. It was a blend of Classical Music and his own style that can now be known as early rendition of Rap and R&B. After his first hit, there was no looking back in his career spanning over Five decades.

In late 1930s, Master Chander worked as Hero in films Dilaram (دلارام) and Maut Ka Toofan and was also cast for Achhot Kanya with Devika Rani but opted out as, just before the production, two of his five sons passed away within months of each other. Though this ended the acting career of Master Chander, he record seven songs for film Achoot Kanya.

Master Chander, being far ahead of the contemporary singers, was famous among the younger generations of that time. His musical hits and fan following was at par with the heights of Elvis Presley and the Beatles.

Beside his own poetry, Master Chander sang songs written by the great poet Prasram Zia (ضيا پرسرام) and he was the highest, 7% royalty receiving singer in the entire history of HMV Music.

After sending his family to Bombay during the partition of India, Master Chander narrowly escaped death. He began to write and sing songs about giving confidence to the displaced Sindhis in India with songs such as “Mitha Abana” from the film Abana (اباڻا), Kismat Kai Judai ( جدائيڪئي قسمت) and Hoshiyar Sindhi (هوشيار سنڌي).

After joining his family in India, he continued to his work and trained his sons, Gope (گوپ) and Mahesh (مهيش) in Classical Music. Gope Chander, is a well-known Singer in the United States while Mahesh Chander, also known to have Velvet Voice, is Singer and Music Director having won many awards and was recognized for composing the Indian PM Atal Bihari Vajpayee’s poetry. .

In 1955, Master Chander availed the chance to give a concert in Sindh along with his son Gope Chander, where they were warmly welcomed by the people of Pakistan. Though he never visited Sindh again, he gave concerts all over the world during the 1960s and early 1970s.

On November 3, 1984, the heartbeat of Sindhi Music stopped when Master Chander passed away, leaving behind a rich inheritance. In mid-1990s, his family created the Master Chander Sangeet Academy in New York (USA) and Bombay (India) to carry forward his contribution to Sindhi Music.

With memorial Concerts held in New York, Bombay, Delhi, Jaipur, Ahmadabad and Ulhasnagar every year, Master Chander continues to live in and rule the hearts of Sindhis across the world.